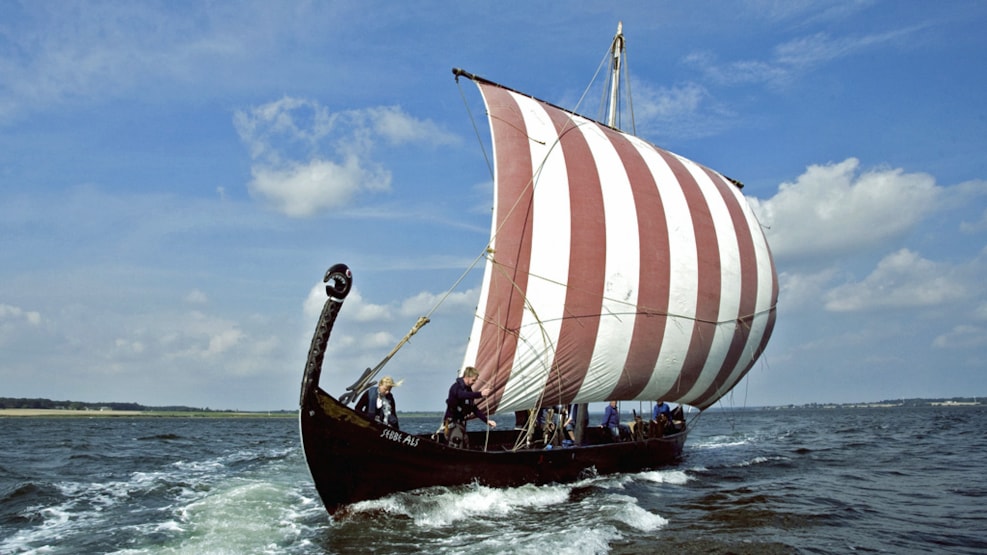 Sebbe Als was built in Augustenborg, as the first original copy of Skuldelev Vrag 5, and is the oldest sailing Viking ship in the Nordic waters.

This is a true copy of a Viking warship.

Sebbe Als was built in Augustenborg in the period 1967-69 and is the oldest sailing Viking ship in the Nordic waters.

Wreck 5
The ship is a true copy of wreck 5, which was found at Skuldelev in Roskilde Fjord. The dating of the wreck shows that it was built in Denmark around 1030-50 AD. and has undergone a major repair of the foreship in 1060-80 AD. Which is at the end of the period of the Vikings. The wreck is clinker-built of oak, pine and ash.

Facts about the ship
Sebbe Als is 17.5 meters long and 2.5 meters wide. There is room for 30 people and the ship has 24 oars. However, the members prefer to sail with the 42 m2 sail - mayby the Vikings also preferred that way of journey?

When Sebbe Als is not on a trip in the summer, it is usually by one of the bridges along the dam in Augustenborg.

The Naust
In 1972-73, the members of the Viking ship battle Sebbe Als built a boathouse (boat house) according to drawings from Norway. The boathouse is located on the south side of the entrance to Augustenborg and is used for winter storage by Sebbe Als and Ottar Als - an eight-man farer from the Faroe Islands, which was launched in 1978.