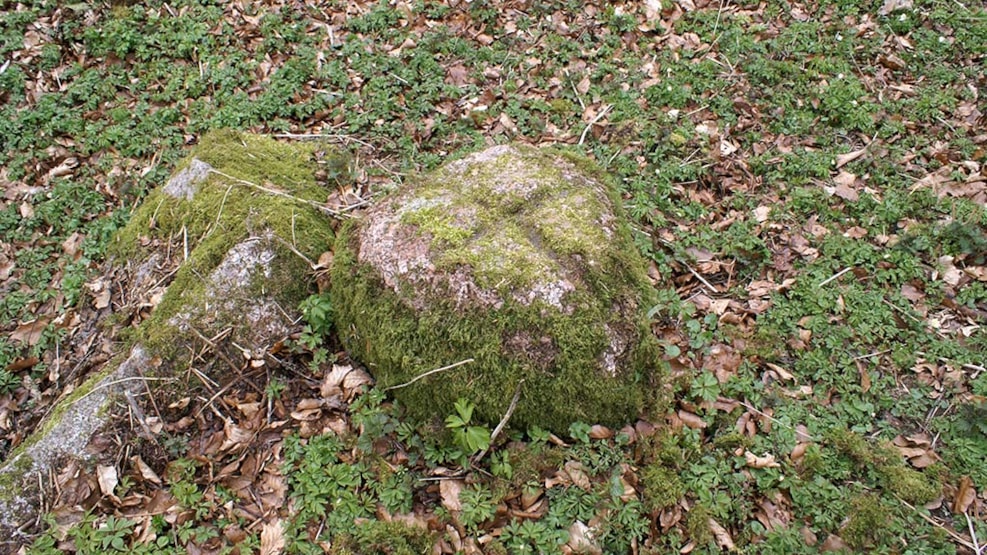 The forest where a cross stone saved the other stones by the dolmens from being removed and re-used.

It has been a long time since the small forest has been fenced in to keep the European fallow deer inside, but the name Dyrehave still hangs on.

Rumohrsgård Dyrehave is a cosy forest, where the creek “Hundslev Bæk” winds its way past the small dams, bowl barrows and round barrows of earlier times. In the spring, both white and yellow anemones bloom in the forest, as well as the wild, protected orchid; early-purple orchid. In addition, there are different kinds of grasses as well as yellow pimpernel, mercuries and red campion.

The forest hides several burial sites, such as bowl barrows, round barrows and long barrows, as well as a cup-marked stone.

The cup-marked stone
Only about 1000 cup-marked stones are known in Denmark and this stone is one of the best preserved. The small round cup marks are man-made depressions and there are no less than 155 of them on the stone in Rumohrsgård Dyrehave. The cult stones, like this one, are believed to have been used in connection with worship and fertility rituals, where there may have been offerings of butter, honey or even blood.

Another special stone is the Cross stone, which stands on one of the long mounds and has literally saved the other stones from being removed, chopped up and used for construction.

The cross stone
It is in the year of the lord 1863 that the owner of the forest sends men out into the forest to fetch stones. There are many burial mounds with large stones in the forest and Hellemann wants to cut them up and use them for his construction at the farm Rumohrsgård. When the men remove a cover stone on one of the long barrows, they see that the stone below bears the sign of the cross and they dare not continue the work, but hurry back to the farm and tell Hellemann about the strange stone. Whereupon it is told, he said; so let them stay for the sake of the cross!

What Hellemann did not know was, that the sign of the cross did not originate in connection with Christianity, but has been used as far back as the Stone Age. Therefore, we can thank a so-called pagan sign and general superstition that today a stone with the sign of the cross and the other stones still can be seen in Rumohrsgård Dyrehave.