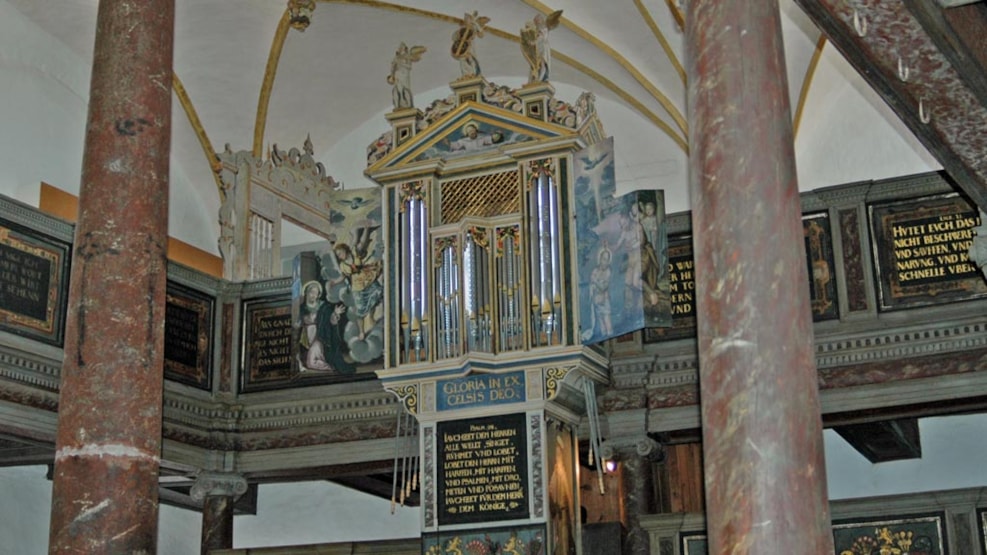 The Nordic region's oldest, preserved Renaissance church room and one of the oldest and best preserved princely church rooms in Europe. Beautiful portal epitaph over Duke Hans the Younger - the ancestor of the Danish royal house.

The wing altarpiece was made around 1550-60 by Frans Floris, Antwerp. The baptismal font is made of black limestone, flamed marble and figures of alabaster, it was ordered by Christian III in 1557 at Cornelius Floris, Antwerp.

After the death of Queen Dorothea in 1571, Duke Hans took over the Younger Sønderborg Castle and from his time the pulpit, the thrones and the three figures on the organ originate, these parts were made by a local sculptor, Niels Tagesen.

From Duke Hans' time also comes the incredibly beautiful portal epitaph, which surrounds the locked door to the crypt with the ducal family.

The epitaph made of black marble and alabaster shows Duke Hans the Younger, kneeling with his 8 sons on one side of a resurrection relief and on the other side kneeling his first wife Elisabeth of Braunschweig-Grubenhagen and their 6 daughters.

The church has only served the nobles and after the ducal family leaves the castle in 1667 the regular church services end and the last known act is the funeral of Louise Augusta in 1843.

For opening hours, see the Museum at Sønderborg Castle.