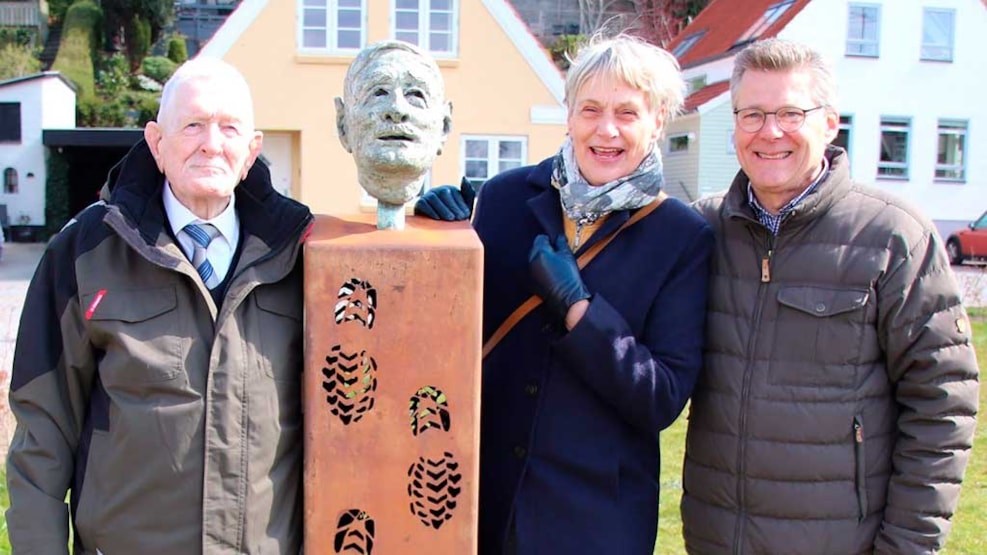 This sculpture pays tribute to a great personality who has left his footprints within art in Sønderborg's streetscape.

The sculpture, which was inaugurated in 2019, is made of bronze by Vibeke Fonnesberg and very fittingly placed on a pedestal adorned with footprints.

A tireless, fiery soul with a twinkle in his eye is probably a suitable description of A.P. Hansen, who after his work as a manufacturer and mayor of Sønderborg Municipality sat as chairman of Sønderborg Art Foundation for 10 years from 2007 to 2017.

A. P. has left his mark on many works of art, buildings and projects, including Alsion with the world-class concert hall, which his bust now faces. He has also had a hand in the game regarding works of art such as Der Butt im Griff, Martin with the Whistle and Hønekilden.

For several years, A.P. also took guests on a tour of the various works of art and told many an anecdote about the creation and acquisition of funds for the work, but with the year 1930 on the birth certificate, these tours have been put on hold.

However, the joy for art and culture clearly shines through when you see and hear A.P. tell in one of the many small films about the works of art along the Culture Tour in Sønderborg - read more and watch the films via this link.

The picture shows A.P. together with artist Vibeke Fonnesberg and Mogens Jensen from the Association for Inge Adriansen's Bench.