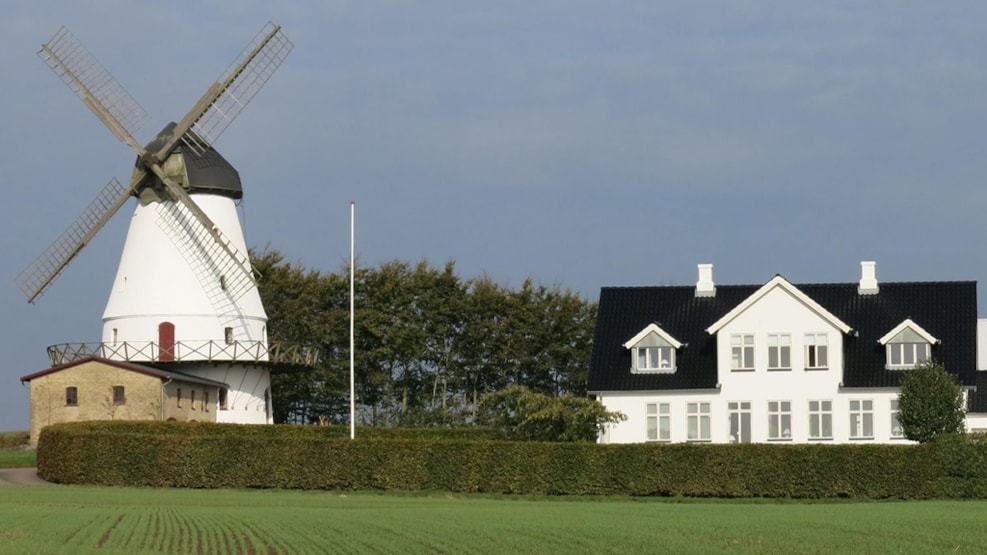 Nybøl Mølle is not only beautiful and well-maintained. It also bears witness to a terrible accident, is a symbol of Danish victory in the 3-year war and was used as headquarters for the Prussians in 1864.

Since the 17th century, there has been a mill on this site. Originally it was a post mill, which in 1879 was rebuilt in the style of a Dutch windmill, and it is the well-maintained Nybøl Mill that can be seen from Motorway 8.

There are records dating back to 1649 of all the millers on the site. One of them was Peter Asmussen Møller, who had the mill from 1679 until his son-in-law took it over after an accident in 1702.

A mill in operation is certainly not without danger, and at many a mill you will find reports of accidents. On 1 March 1702, the miller assistent at Nybøl Mill was unlucky enough to be caught by a mill wheel and pulled through the grinder - Karsten Christensen from Avnbøl died at the age of 25.

During the 1st Schleswig War, also called the 3-year war (1848-50), the last major battle was at Nybøl, where the Prussian general, Hugh Halkett, had reorganized his 7,000 men and artillery in a strong defensive position against the advancing Danish troops. A fierce battle ensued at Nybøl Mill, but thanks to General Schleppegrell's attack on the flank, the Prussian troops had to give up and begin a retreat over Adsbøl and Gråsten.

The war in 1864 again brought Prussian troops to Nybøl Mill. This time it was used as the headquarters of General von Roeder's 12th Brigade consisting of the 4th Brandenburgisches Infanterie-Regiment Nr. 24 and 8. Brandernburgisches Infanterie-Regiment Nr. 64. On 29 June 1864, at 2 at night, Roeder's 12th Brigade was ready in Sottrupskov and as the first they crossed Als Sund and began the battle for Als.

In 1879, a fire broke out in the post mill and it was decided to rebuild it as a Dutch windmill. Nybøl Mill was in operation until 1957, but it was not until 1998 that the mill was protected and in that connection the mill was painted and got a new roof and wings, in addition the side building had new gates inserted, was braced and got a new roof - all with funds from the Danish nature agency, Skov- and Naturstyrelsen and the Augustinusfonden.

Today Nybøl Mill belongs to Jette and Hans Christian Lind, who like to open the mill when they are at home.