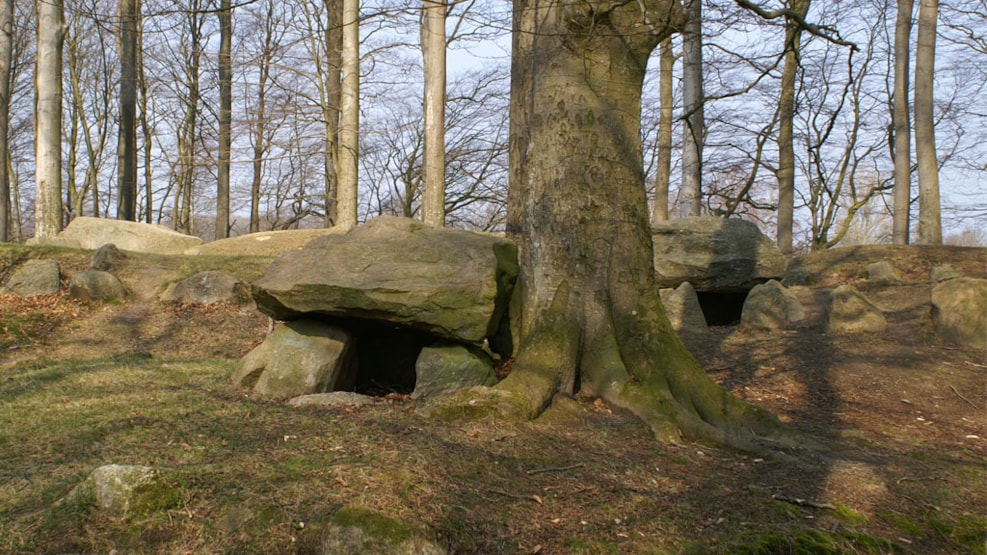 The largest collection of barrows in Sønderjylland is found on the island of Als.

The small forest Blomeskobbel lies by the Little Belt, approx. 4 km southeast of Fynshav. This is a deciduous forest with a few evergreens. Small orchids can also be found here. The forest is popular due to its unique collection of dolmens.

The forest in named by Hans Blome von Seedorf, owner from 1554-84. Two huge long barrows measuring 53 and 34 metres, each with 2 burial chambers, lie side by side in the northern part of the forest. During restoration of the barrows in 1935/36, only a broken clay trough and some flint knives were found.

Barrows has always been a large temptation through time for grave robbers. Even a district bailiff from Augustenborg Palace is said to have opened 4 burial chambers, where human bones were found and later buried in Augustenborg cemetery. Near the long barrows, there are 2 round barrows, one of which has an exceptionally fine chamber.

To the south - approx. 75 metres into the forest - lies, another round barrow, not in good condition, and 300 metres to the west, just outside the forest, another long barrow with the remains of 2 stone chambers is located. The paths in the forest follow the natural terrain of the land, and their originals date back several hundred years.

For larger travel groups on board a bus we recommend to stop on the road `Østkystvejen´ and let the passengers proceed on foot (distance to the tombs approx. 1,100 meters)