Tilting-at-the-ring festivals is a permanent tradition in South Jutland, which first arose as a folk festival in Augustenborg in 1845.

Experience the cities at full galopp!

Each city have their own festival during the summer. Over the course of a weekend, you can experience the national festival and meet the locals when the riders compete against each other for the title as king, crownprince and prince. 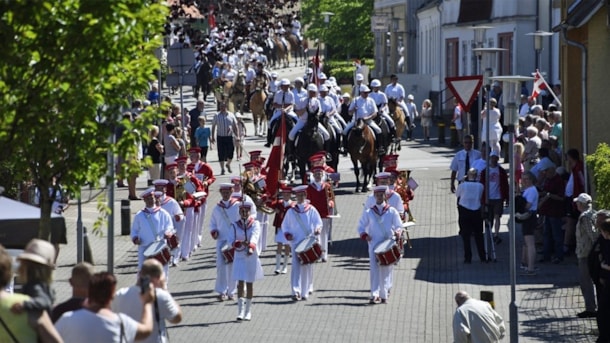 Parade through the town and tilting competition. 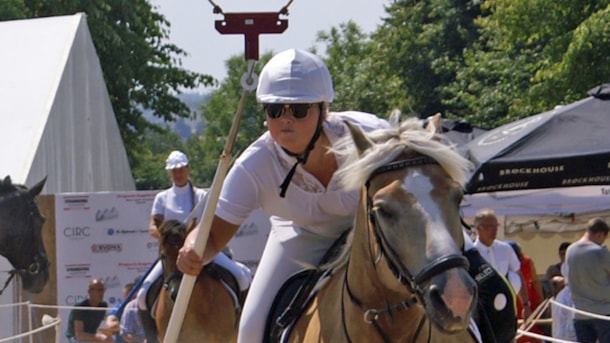 In 1845, Duke Christian August II decided that he would like to be entertained in Augustenborg on Als by a display of tilting-at-the-ring, and the sport still continues. 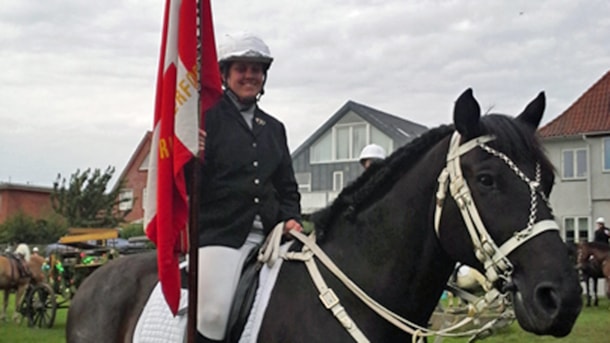 The equestrian procession starts at 12. 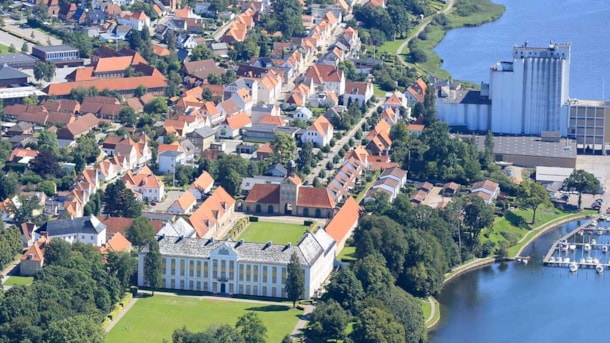 Sunday: at 11 am Parade of riders through town, following by tilting competition. The parade on horseback begins at 11.30 am at the store Davidsen and leads through the city Høruphav to the tilting grounds at Hotel Baltic. Each year at the first weekend of July, all citizens of Broager look forward to the yearly village fair and tilting in Broager and we would l... Kegnæs Ringridning (tilting-at-the-ring) is one of the smaller events where we also hold a summer party at the same time. 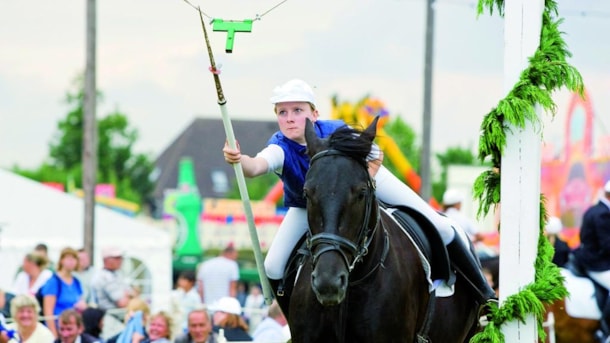 Tilting the ring in Gråsten takes place annually. A real national festival with a horse parade at noon on Saturday and Sunday to the tournament place.

During the Sunday parade, on horseback, it is tr... Friday evening: Tilting at the ring lunch with music and dancing.

Sunday: Parade through the town at 11.30 am and tilting competition. 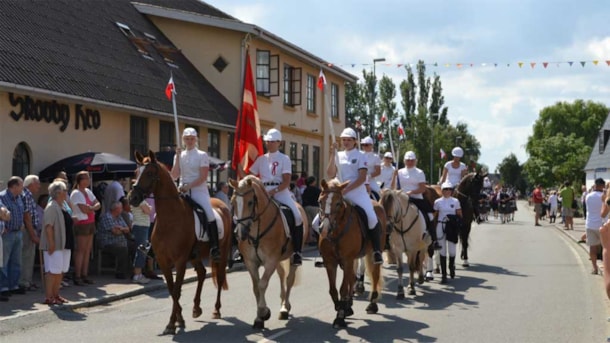 The party place opens on Friday night with a ringrider lunch in the tent. On Saturday there is ring riding for cyclists and garden tractors.

Sunday the parade starts at 11.30 with riders high on hor...

The riders meet on the tilting site at 11.30 am for a contest about who will be the king of the year. On the 2nd weekend in August the yearly Village and Tilting-at-the-Ring Fête is held on the sports ground at Sydals-Hallen in Tandslet.

Friday evening there is a l... – always on the 3rd Saturday in August.

Between 90 and 120 riders meet up here to compete in the 6 gallows on the tilting-ground near the allotment gardens on the corner of Stationsvej and Borrevej i...

A small event where the locals meet to keep the tradition alive. There is no procession - the riders meet on the site and the tournament starts at. 11.

Just what IS tilting-at-the-ring? Imagine tryin...

A small event where the locals meet to keep the tradition alive.

Just what IS tilting-at-the-ring? Imagine trying to spear a ring with an eye measuring a mere 22 mm on a lance while riding a horse at...

Tilting-at-the-ring stems from the Middle Ages, where knights compete against each other on horseback for great entertainment for the European nobility.

Participation in these tournaments is reserved for noblemen and knights, despite the fact that they are trained in warfare, the tournaments often demanded the lives and mobility of the contestants.  When King Henry II of France dies in 1559 of his injuries from a tournament, the sport is banned in the country.

The equestrian sport introduced to Denmark in the 16th century by Christian III and his son Frederik II is a more pleasant and harmless riders’ tournament for nobles and lords. What the nobility does the public will not be left behind and from the middle of the 19th century there are descriptions of tilting-at-the-ring at village fêtes.

If you are interested in knowing more, you can visit the only tilting-of-the-ring museum in Denmark at the yellow half-timbered house in Kirkegade at gain more insight into the history of the tilting-of-the-ring festival. The house is also the second oldest house in Sønderborg

Nowadays the riders compete for the title of King. To achieve the title you have to be able to master the art of riding gallop through a gallows and at the same time spear the ring with your lance. To begin with, the ring has a diameter of 22 mm, sitting in a bracket from two strings. If you succeed in collecting all 24 rings, you are through in the tournament. Now the competition becomes more difficult, since the hole within the ring decreases, until it is only 6 mm wide. The one who survives the most rounds is proclaimed king, although a crown prince and prince is also found.

The biggest tilting-at-the-ring festival in Scandinavia takes place in Sønderborg during the 2nd weekend of July. Here approx. 500 riders participate in an impressive parade, both before and after the tournament on the tilting-at-the-ring square. The parades on horseback is on Friday and Sunday from 11:00 o´clock were you can admire the beatiful horses and listen the many local and foreign bands playing in the streets of Sønderborg. Saturday evening an amazing tattoo-show is on at Sønderborg Castle - buy your ticket on Ticketmaster. The programme of the Tilting Festival in Sønderborg is available on the tourist office and the website www.ringriderfesten.dk approx. 3 weeks prior.

A guided tour on Tilting-at-the-Ring

On Tuesdays during high season, you can experience a bit of the tournament from the Middle Ages on the historic tilting-at-the-ring track at Sønderborg Castle. Here the riders compete while wearing real Middle Ages costumes. 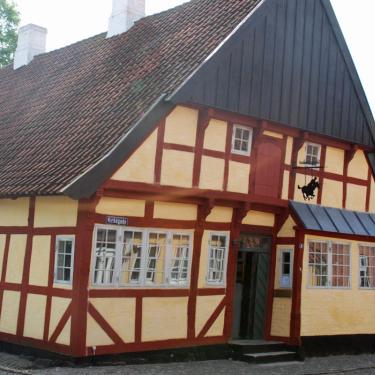 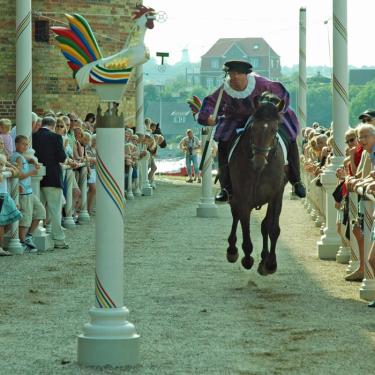 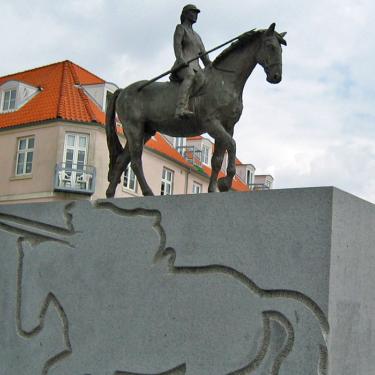 The yearly parade on horseback through the streets of Sønderborg is on Friday and Sunday in the Tilting-weekend. Photo:Array