The discovery of the Hjortspringboat (350 BC) near Guderup on island Als and the Nydamboat (320 AD) at Sundeved, has marked maritime history in Europe.

These are NOT Viking ships! However, we are talking about two sensational maritime findings showing the development within shipbuilding over a time of 700 years. From the Hjortspringboat, a light war canoe dated 350 BC to the more stable clinker-built Nydamboat dated 320 AD.

Unfortunately, the original bog findings are not at a museum in Sønderborg. The Hjortspringboat is exhibited at National Museum in Copenhagen and the Nydamboat can be seen at Gottorp Castle, a 1-hour drive south of the border to Germany.

However fiery souls makes it possible to see true copies of the two boats. At Hjortspringbådens Laug, situated in the small village Holm on North Als, they have built the replica Tilia Alsie, instead of built we might have to say sewed and at Sottrupskov Storskov on the mainland you´ll find the larger boat Nydam Tveir.

Nydam Tveir is laying in the water during summer, and if the weather gods are merciful, the members of Nydamlauget rows a tour in the ship every Tuesday evening.

From bog find to replica

This is a Viking ship! 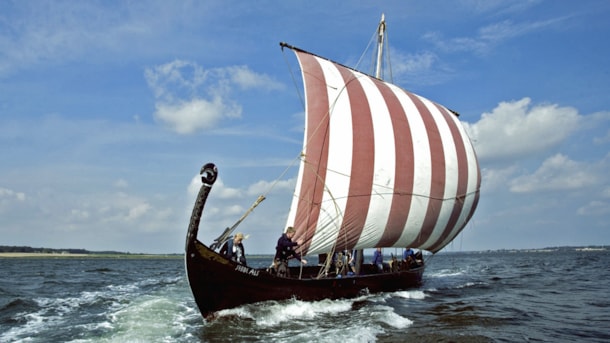 Sebbe Als was built in Augustenborg, as the first original copy of Skuldelev Vrag 5, and is the oldest sailing Viking ship in the Nordic waters.

Museum at Gottorp Castle in Germany

The Nydamboat was discovered in a bog at Sundeved in 1863. Today it is exhibited in the Museum at Gottorp Castle in Germany, approx. 1-hour drive from Sønderborg by car.Photo:Museum Schloss Gottorf