You´ll find some real gems of church history in the Sønderborg-area. Amongst them Scandinavians oldest, preserved church room of the Renaissance. Denmark´s largest freestanding bell house and the village church with some of Denmark´s best preserved church stables.

If you can be bleesed with churches, consider Sønderborg as such an area, we really have some historical gems to offer.

Queen Dorothea´s Chapel at Sønderborg Castle is the oldest church room of the Renaissance in Scandinavia and one of the best-preserved princely church room in Northern Europe. Behind the locked door of the beautiful epitaph, the coffins of the ducal families are standing side by side. In the summer time, you can experience some very special concerts on the old organ. 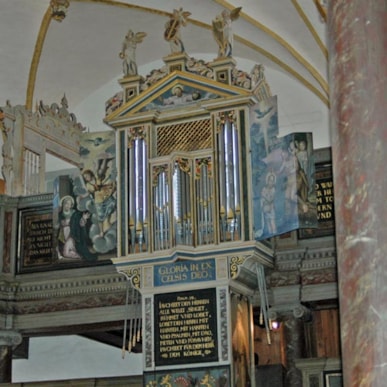 The Nordic region's oldest, preserved Renaissance church room and one of the oldest and best preserved princely church rooms in Europe. Beautiful portal epitaph over Duke Hans the Younger - the ancestor of the Danish royal house. A beautiful princely room from the 18th century, with beautiful paintings and a sumptuous stucco ceiling with doomsday scenarios. 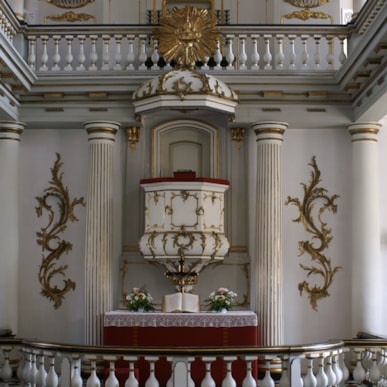 A beautiful and complete example of a princely chapel from the 18th century.

At Broager Church with the characteristic twin tower, you can enjoy the sight of some beautiful wall paintings and Denmark´s largest freestanding bell house. Egen Church is the largest village church on island Als, here you´ll find some of Denmark´s best-preserved church stables.

Peasants who committed murder were executed, however noblemen visited the Pope and got absolution, they could effort to build. Kegnæs Church was built by Duke Hans the Younger, as penance for the execution of a group of innocent peasants and at the former pilgrimage church in Lysabild you can see a Holy Blood Chapel build of a nobleman as penance for the killing of another nobleman.

The burial chapel at Sønderborg Castle isn´t the only one in our area. Behind the altar of Nordborg Church you can see the coffins of the ducal family through a grated door.

The church in Havnbjerg is national known since 2018, were it was used as location in the film "In Love & War" - did you know the priest in the film isn´t an actor? 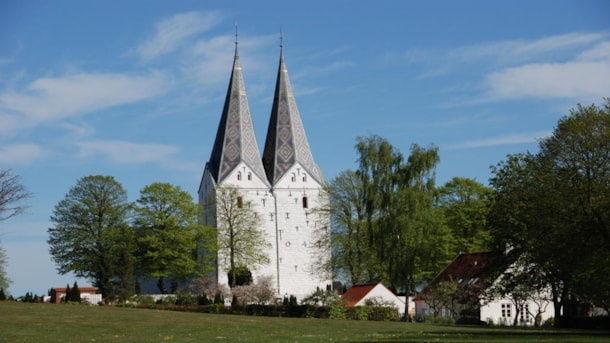 The original church in Broager was built in 1209 with a Romanesque apse, choir and nave. In the 15th century, a tower with 2 spiers was built and the church room was enlarged with Gothic sacristy and ... 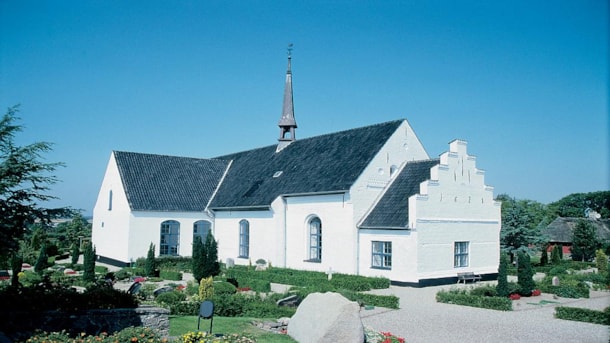 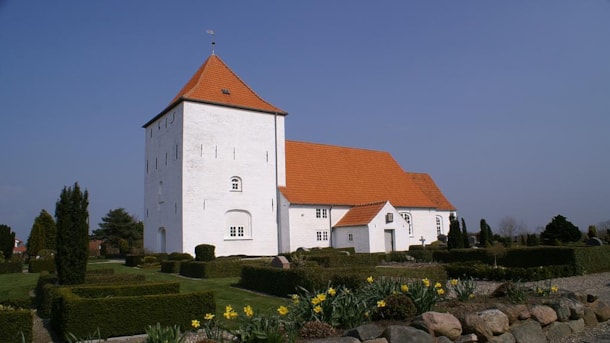 Altarpiece from about 1450. Was formerly, like the font and pulpit, situated in the now vanished St. Nicolaj Church in Soenderborg.

Figure of Christ from about 1500 on railing between nave and chancel... 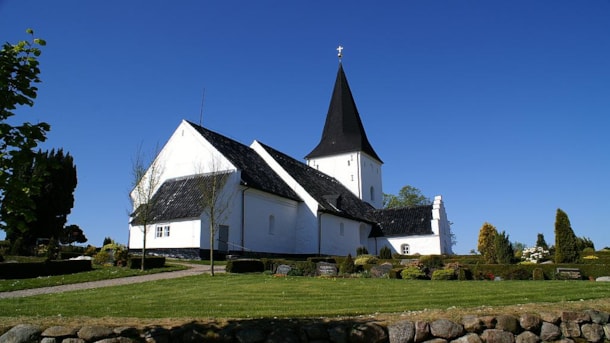 A 12th century Romanesque church of split granite with corners af carved stones. Tower and spire from 1857. The bells date from 1370 and 1920.

The altarpiece is a painting by C.W.Eckersberg, showing J... 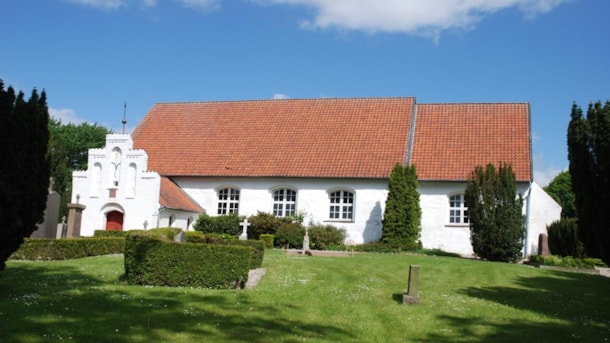 One of the oldest churches in Denmark, built in 1158 in the Romanesque/Norman style. The church is found at the top of a hill, 4 kilometres outside Rinkenæs. Originally it was surroundd by a village, ... Built 1928-32 in the style of a traditional Danish village church, whitewashed walls, red tiled roof and corbiestepped tower. A beautiful sight with the inlet landscape as a background. The church in Egernsund is very young; it was built of hand stroke stones from the region's own brick works in 1909 and is reminiscent of churches in Southern Europe. The altar figures are from the Ty... The church was built in the 13th century and has a Romanesque choir and nave with Gothic west extension. Over time, the church has undergone a numb... 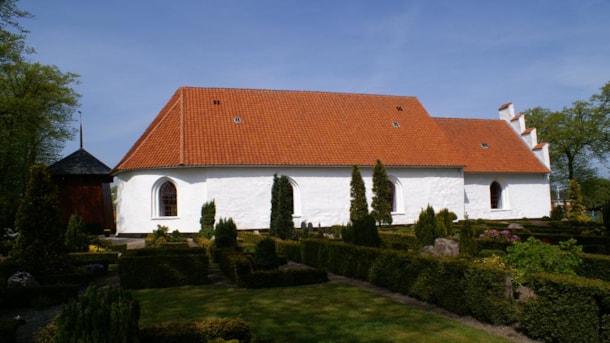 Nybøl Church was built around 1150, as a typical Romanesque boulder building, with nave and choir. Approx. year 1300 the church is enlarged with a semicircular extension in Gothic style. A typical village church with chancel and nave from the 13th century. Large burial chapel for the Rewentlow family from 1750. Baroque altar and Ringerinck pulpit with beautiful carvings. Frescoes. Man...
Info The church was built by Duke Hans the Younger and consecrated in 1600. A small and cosy Catholic church. 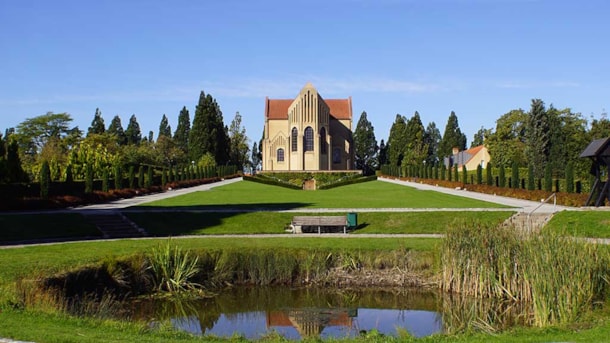 Built in 1957, the church is designed by architects Kåre and Esben Klint in gothic style (Known as Klint-gothic). It was extended in 1973 with a transept, sanctuary and crypt. Ulkebøl Church is originally a romanesque chuerch, extended in 1787 with beautiful triptych altarpiece from the 1500's.
Info Normally the church is only open ... The only church on Als with an apse. Oak bell tower from the Middle Ages situated on Bronze Age mound east of the church.

Frescoes from 1501 and earlier. Pulpit from 1576. Altarpiece by Aabenraa artis... A very unusual and interesting cruciform church. The oldest part of the choir dates from the 1100's. Crucifix from 1450. Altarpiece from 1719.
Info Vor Frue Kirke of Notmark, with its wide fortification tower, dates from approx. 1200.

A carved altarpiece from 1520 shows Marys crowning in heaven. Ketting Church with the powerful tower, towers over the other houses in the town. The church is built on a man-made elevation in the 12th century with small windows and a very wide and high tower, whi... 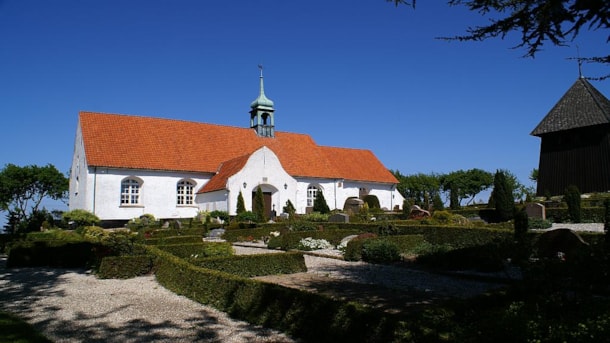 An original church without a steeple from the 12th century with later additions. The baptismal font and the rood date from early medieval times. The pulpit is from 1688. Romanesque church with gothic tower and porch. Of special interest: A gothic triptych altarpiece from the beginning of the 15th century, a Baroque/Renaissance pulpit from 1626 and wooden font from abo... This small white church stands on a hill above the town. It has a Romanesque chancel and have and two newer extensions. West of the church stands a wooden belfry, built in 1815. 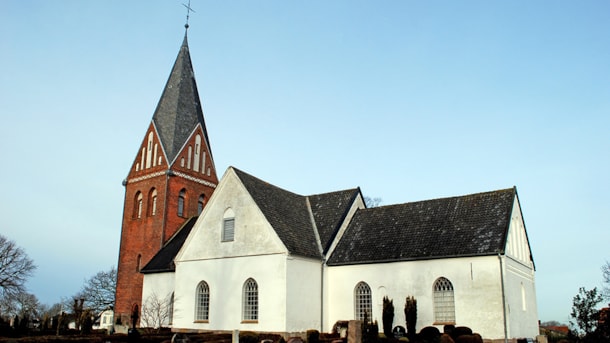 Visits can be arranged Monday-Thursday: 7 am - 3 pm and Friday: 7 am - noon or by appointment.
The time of visit can be agreed with the church custodian o... Sottrup Church was built in the 13th century and today has a tall, Gothic tower with numerous wall anchors and strong pillars, which was added in 1650. The original church tower had to be replaced by ...