War is frightening, yet fascinating

The latest focus on these fateful events in Danish history, was the drama series “1864” by the Danish Broadcasting Corporation DR, based on writer and journalist Tom Buk-Swienty’s marvellous books ‘Slaughter Bench Dybbøl’ and ‘Doomsday Als,’ that helped a great deal to create renewed interest in this chapter of Danish history. Buk-Swienty’s works take readers on a journey back to the fateful year and portrays various people and their involvement in the conflict.

The loss of the war in 1864 becomes extremely perceptible during WW1 (1914-18), Denmark is neutral and not participating, however the men living in the occupied South Jutland is enrolled in the German army and send to the front.

The journey will be complete only when you are standing on Dybbøl Banke, looking towards Broagerland, from where the Prussian grenades rained down on the entrenchments, or when, an early morning, you gaze across Alssund towards Sottrupskov forest on the Jutland side from Arnkilsøre, because this is where the final attack was made on June 29, 1864. The history is still present, and closing your eyes you can almost sense the sounds, the smells and the fear.

If you would like to experience the whole story of the battle, you must begin south of the border at Danevirke. This is where the Danish army was ready to fight the Prussian soldiers when the war broke out on January 31, 1864. However, after the initial encounters in front of the position, it was evident that the position could not be defended, and the Danes decided to abandon it on February 4.

A few kilometres from Schleswig, where the military road crosses Danevirke, lies the Danevirke Museum. Recently, traces were found of the gate that regulated traffic on the military road in antiquity. The museum tells the story of Danevirke and is worth a visit, but you must remember to bring some Euros; the museum does not accept Danish currency or credit cards. 500 metres west of the museum, Danish and German engineer corps have restored the entrenchment Skanse 14 on the basis of old drawings and photographs.

Coming from Gråsten towards Sønderborg, Dybbøl Banke lies as a natural hill that protects the town from the west. There is a fantastic view of the entire area from the entrenchments, and you can see the northern part of the sound Als Sund and the inlet Flensborg Fjord.

A visit to the History Centre Dybbøl Banke provides the best presentation of the battle of 1864 and is an adventure for both children and adults. The Centre communicates the story from both sides of the conflict, which means that, in the peak season, you can meet both a Prussian and a Danish soldier when exploring the Centre.

Under the cover of darkness on June 29, the first Prussian soldiers boarded their boats, took to the water and headed for Als. The Danes discovered far too late that the attack had begun, and they did not have time to react before the area was overrun by Prussian soldiers.

If you follow the path Nydamstien, you can still find slideways and depressions in the soil where the rowing boats were put in the water, and you can also see where the Prussian cannons were placed. Pick up a leaflet with the route at the tourist office.

Every year, in June, the ‘Battle of Als’ is re-enacted. The battle was the decisive battle in the war of 1864. During the weekend there is a march with authentically dressed soldiers through Sønderborg city, a soldier’s camp at Kær Vestermark and a re-enactment of the crossing to Als at Arnkilsøre in the middle of the night. The event is truly worthwhile.

Route 1864. By the help of your mobile phone, you can relive the events of the war on route 1864 through the Sønderborg area while you listen to eyewitness accounts in the locations where they occurred. Scan the QR code and find more information on the war of 1864.

Photo of Carl von Jena´s memorial stone at Dybbøl Banke. Many soldiers were buried on the spot they had fallen and you´ll find many crosses and memorial stones on Arnkilsøre.Photo:Kim Toft Jørgensen

The Museum at Sønderborg Castle 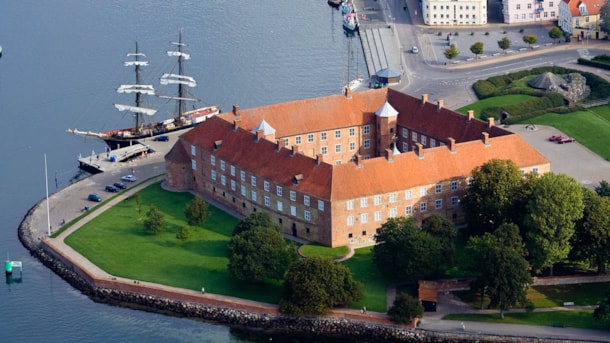 The Museum at Sønderborg Castle The Nydam Path (7 km) starts at Sottrup forest. You can follow a route along the water, leading past the place where Prussian soldiers embarked in rowboats to capture Als in 1864, and past Sandbjerg M...

Apps and links for more information:

What led to the war in 1864 and what actually happend?
The 1864-Apps
Read more on The Battle of Als
Visit Danevirke Museum